ETHEREUM: ITS BLOCKCHAIN AND EXPLORER

Ethereum: Its Blockchain and Explorer

The technology that supports cryptocurrencies is characterized by decentralization, immutability, and transparency which traditional mode of payment doesn’t guarantee.

The chains of blocks where the transactions made with cryptocurrencies are registered are generally public, without this means that the privacy of the users is compromised. Well, although anyone who wishes can track down who sends and receives funds – or other assets – through the blockchains, this does not mean that this person has access to the identity of the network user unless the same user provides the information that permits such access such as the private keys.

The blockchain explorers are tools designed to allow network users to access real-time and secure the information of its operations and other events in the chain.

The blockchain explorers establish direct contact between users and the much-mentioned transparency of the cryptocurrency transfer protocol, which generates confidence in this technology. These explorers work in a specific chain, so we do not find one that can give us information about two or more blockchains simultaneously.

One of the most basic data we have access to is the height or number of the block, which allows us to search for information more easily in the chain; especially if we consider that a blockchain like Bitcoin, at present, has more than 530 thousand blocks.

A blockchain explorer also allows us to see the number of transactions whose information is stored in a given block, the date and time they were made and the weight they have, measured in kilobytes. In addition, we can find information on how many confirmations have received the transactions of a block, which are the validations received by the miners.

To this information is added, both the number of cryptocurrencies that were sent in the block’s transactions and the commissions that those transactions generated. We can even know which mining group or mining pool was responsible for mining each block.

The second cryptocurrency with the greatest capitalization of the ecosystem, the ether (ETH), belongs to the blockchain of Ethereum, whose chain of blocks works in a slightly different way than Bitcoin, thanks to the particularities that differentiate both. For this reason, transactions in Ethereum can be tracked through different browsers than those mentioned above.

The blockchain developed by Vitalik Buterin and his team in 2014 and launched in 2015. Ethereum is one of the most used blockchain technology to support new tokens or cryptocurrency. Thanks to the protocols it handles, and decentralized applications (DApps).

One of the most used browsers among ETH users is EtherScan. The platform does more than just show and allows for tracing the cryptocurrency based on the Ethereum blockchain and ether itself, as it has multiple analytical options.

Etherscan allows the ether user to see in detail the blocks that make up the chain and the transactions in real time, as well as graphs of the behavior of the native cryptocurrency of Ethereum in the last 14 days, which are shown first after accessing the website.

Likewise, the explorer has the option to visualize the location of a specific transaction in the chain and also offers a mining calculator, which allows the ETH miners to have an estimate of consumption and income linked to this activity; a service that encourages enthusiasts to obtain, in a reliable manner, detailed technical information.

Other services available in EtherScan are the verification of smart signatures, explorers for test networks and a whole section of options for developers interested in the APIs (Application Programming Interface, according to its acronym in English) of Ethereum.

It is important to keep in mind that, being Ethereum the chain of blocks in which altcoins have been built the most, the block explorer has the option of exploring token transactions like VeChain, and OmiseGo. These virtual currencies have the same basic information as transactions with ether.

In Etherscan you can explore the transactions of other cryptocurrency based on the Ethereum blockchain.

The explorers of the blockchain chains are fundamental tools for the participants of the ecosystem since they are an essential part of the process of carrying out transactions with cryptocurrencies.

The future of gaming

The future of gaming

With cryptocurrency, blockchain technology and smart contracts, the world is changing. It is just a matter of time until games like CryptoLeague won’t be that special. New technologies give so much room for innovation, whether in games, in finance or in notarial context.

Image a game like Diablo: Since the most successful Diablo 2, there were so called „unique“ items. ‘Unique’ means that only one of those items can drop per game. But as soon as you leave the game and rejoin, you can find it again. Maybe your next door neighbor, who is also playing Diablo, has the exact same „unique“ item in his chest. This is a very strange interpretation of the word „unique“!

In games like CryptoLeague, unique literally means unique. Every player exists only once – if you have him, nobody else can have him (as long as you don’t sell the player to him). So far, this is true for CryptoKitties as it is for CryptoLeague. But in CryptoLeague, your players are worth a lot more than some bucks in cryptocurrency. You can use them, set them up in your team, win with them – and, of course, train them, make them better, resell them. It is a bit like Magic the Gathering, but with uniques all over the place! Who needs Uncommons and Rares if you can have a set of uniques!

We, the team behind CryptoLeague, are so thrilled about these new possibilites that we decided to make a game utilizing this. We hope you are excited too. Stay tuned! 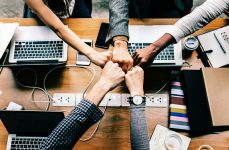 How did we get the idea of CryptoLeague? And who are we?

First of all I would like to introduce us. We are Simon, Pascal and Julius. We are the founders of CryptoLeague. Most of our working career we worked for great eCommerce players in Germany. But we are also highly interested in new technologies. So what comes next? Of course: Blockchain and Cryptocurrencies. In our opinion a great chance for the modern world. But in this blog post we won’t say too much about currencies and technologies. We plan to write an own article for it very soon.

So the question of questions: When and where did we get the idea of CryptoLeague?

It was December 2017. Simon and I drank a beer in Hamburg and ate the best burger in town (Check out Bucks Burger in Hamburg). We talked about our jobs and also about some new trends. When Simon said that there is a new possibility to use cryptocurrencies in a browsergame, I was fascinated. What did he mean? Answer: Cats! What the hell? Really? I was disappointed and also excited. The first thing when I was back home was to check this page out. And it was pretty good, nice images, clean homepage: Cool.

The game begins: Install Metamask, send ETH to the wallet, buy a cat and then …? Aehm yeah: Buy another cat. I thought: Cool, but what comes next? Of course I could sell it and buy a better one and so on. But what is the difference to normal cryptocurrency daytrading?  Don’t get me wrong. The idea is great with such a big potential. I called Simon and said to him: What if we make a game based on blockchain but with more functionality and a topic which is even cooler than cats and pets. What about a soccer manager. You buy unique players and can train them and sell them. My dream was to have a game in which the user can build his own club and like in the real world he can buy young talented players and make expensive superstars out of them or you can be the FC Bayern and buy superstars to win the championchip.

Simon was excited too - so we made some concepts and talked to some developers till we found our great partners for that. It was some hard work and it is still hard work to get the game logic nice and smooth. I won’t get to deep into game topics because also for that we will inform you step by step so you have all the information for CryptoLeague and you only have to start when we are live.

So please, be part of CryptoLeague, soon you can play an enjoy it. We will give you a weekly update for our game. For all other news: Don’t forget to subscribe to our Newsletter. I promise: Only good news in our Newsletter 😉